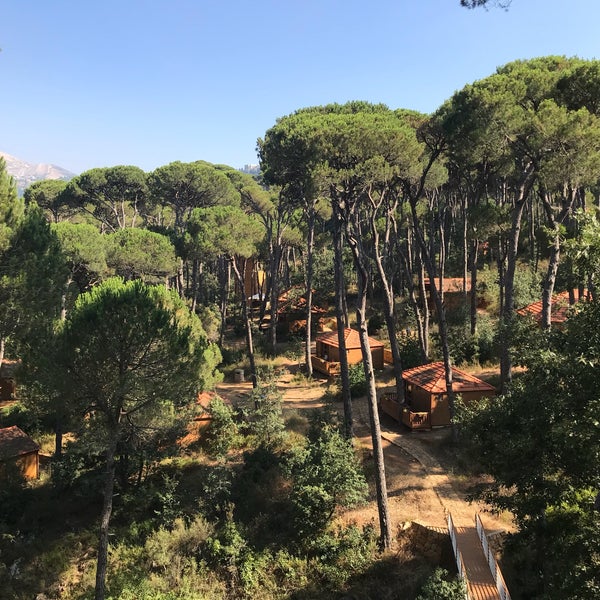 Departure from the hotel at 9:00 AM
Niha Fortress

A special ecotourism day to discover the Fortress of Niha, an ancient fortress one of the Chouf Biosphere reserve entrances, visited as cultural heritage in the Shouf Cedar Nature Reserve.
Carved into the rock of a cliff overlooking the Bisri and 'Aray valley, among world’s most beautiful scenery in the world, the Fortress of Niha has been monitoring the road between Sidon and the Beqaa valley. It is mentioned for the first time in 975 AD and later in 1133. It has been controlled alternatively by the Crusaders and local Muslims until its destruction in 1261. In 1270, the Mamluk leader Baibars ordered it rebuilt. In 1585, the Emir Qorqomaz Maan probably took refuge in it briefly before his death. It is reputed that the Emir Fakhr-al-Din II also found refuge there before he was executed by the Pasha of Damascus in 1635, but it might more probably have been his father Emir Korkomaz, in 1584.

Niha is most known with many caves, both natural and man-made. One among them, a cave-fortress that was cut into a cliff during the Crusades between 1165 and 1260, is named Niha's Castle or Shakif Tiron. According to the popular tale prince Fakhreddine El Ma'ani II hid there when hiding from the Ottomans in 1635.

Jezzine village
Surrounded by mountain peaks, pine forests (like the Bkassine Pine Forest), and at an average altitude of 950 m (3,117 ft), it is the main summer resort and tourist destination of South Lebanon. The town is also well-known in Lebanon for its production of handmade, traditional cutlery and daggers with decorative inlays, artisanal wine, and the shrine of Our Lady of the Waterfall.

Bkassine village
Discover Bkassine has been has been recognized as the most beautiful village in the world by the UNWTO.
The biggest pine forest in the Middle East and one of Lebanon’s most picturesque villages, Bkassine forest

* Our policy is no refunds, however should the tour not take place on the specified date due to any factors we will reschedule the tour.